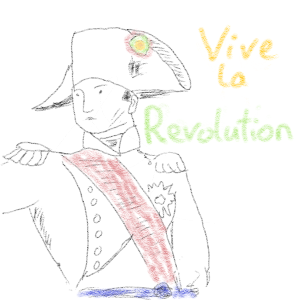 There is a revolution under way: the 4th Industrial Revolution.

And the PMO is, in some ways, the most crucial player in making this revolution happen. The PMO is like Napoleon. Or the guillotine. The revolution just wouldn't have played out without them.

Change is nothing new and it's a cliché to say that change is accelerating, but it really is. It's not just accelerating, but it's accelerating on a whole lot of different fronts all at once. Technologies like artificial intelligence, internet of things, robotics, big data and - well, just throw in your favourite collection of buzz-words - these technologies are driving change at a faster pace than ever before. And this accelerated change has a name; the 4th Industrial Revolution.

And the PMO is a key player in this revolution, but are you ready?

Last week, I was lucky enough to record a podcast with Nik Morris to explore the role of the PMO in this revolution. Nik is not only a veteran of portfolio, program and project management initiatives at companies like EDS and HP, but he is also something of a 4IR (as those in the know call the 4th Industrial Revolution) expert.

I put it to Nik that this is really just business as usual. I mean, the project portfolio has been the enabler of change since dinosaurs ruled the earth.  Not so!

There are two big differences as 4IR really gets going. First the quantity and diversity of change is much, much bigger then ever before. This means that there is much more demand on the project delivery team than ever before.

Next, the costs of project failure are higher. In the past, a failed project was just that, a failed project. But in the 4th Industrial Revolution, a failure to change is potentially a death-knell. The corollary to that statement is that the opportunity if you get it right is unlimited.

If you compete with Siemens,  this is also a game-changer. If their competitors are not also revolutionizing, they will be put out of business.

I guess this has been true of the last revolutions as well, but they were more gradual. This one's happening very quickly indeed.

PMO: The hinge around which the organization pivots

So, the pace of change is greater than ever before. How does that change get enacted?

It is the portfolio of projects that you undertake that transforms strategy into real-world change. Put another way, your ability to deliver projects is the factor that determines how quickly your organization can take advantage of 4IR technologies and business models.  The PMO, therefore, is probably the most critical part of any organization when it comes to 4IR technology adoption.

But are you ready? Is the whole project management industry ready?

Well, some are; some are not.

When I asked Nik this question, he talked about some interesting PMI data showing the massive difference in performance between the best project project delivery organizations and the worst. Truth-be-told, most organizations could improve considerably, so what's holding them back?

I was surprised by Nik's answer. Nik focused on giving the PMO the space to become strategic. He talked about the importance of project prioritization and of picking projects that really matter - I was not surprised by that! - and about project methodologies. Where I was surprised was the strong emphasis he put on broad and deep experience and on having a strong understanding of the wider business context.

Without that, how can a PMO really add value at a time of massive change? And many (most?) PMOs don't necessarily have that breadth and depth of experience across project organizations, across industries, across functions.

Still, the key point that I wanted to get across in this blog is this; the PMO is the hinge around which the whole organization pivots. This places an incredible burden on the shoulders of a PMO, but it also represents a fantastic opportunity. It's a chance to learn new skills, to broaden your horizons and, frankly, to develop your career.

In other words, the 4th Industrial Revolution begins and ends... with you!