This may seem like an odd question, but when did you last play Tetris? 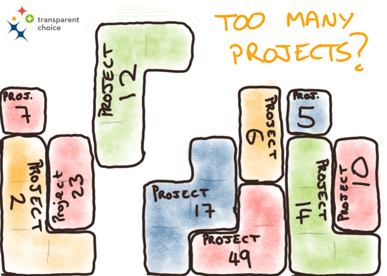 Believe it or not, we can use Tetris to demonstrate something crucial about project portfolios. This should be a fun blog - you’ll get to play Tetris, after all -  but there’s also a little bit of maths buried in there… all in the name of delivering more projects successfully!

We’re going to look at why taking on too many projects causes so many problems - I mean really dig in to it - and we’ll see what you can do to solve the problem.

“I have too many projects!”

This is the most common cry of the PMO leaders I talk to. They have too many projects (or too few resources - it’s the same thing) and it’s killing them.

Usually the symptoms they complain about are overworked teams and an inability to allocate resources quickly and easily. While these are serious problems, the Big One is project failure.

Having too many projects is pretty much guaranteed to increase your project failure rates.

Now it seems obvious that, if you try to do too much, you’ll mess things up, but I recently came across a rather good (and rather geeky) explanation of why this happens. Here’s a summary and don’t worry if you don’t follow all the maths - the chart will tell the important story.

Let’s say your team can handle 120 projects per year - that’s your capacity.

So there are 120 projects queuing up to get done and if you look at queueing theory, you find that the waiting time for each project (think of “Waiting Time” as the chances a project will be delayed) is governed by the equation:

Now, if you’re not a mathematician, you probably don’t immediately see why that equation matters.  This chart, I hope, makes it absolutely clear. As your When your utilization is low, waiting time is low, but when you get to a utilization of around 90%, waiting time (project delays, cost over-runs, etc.) shoot up. 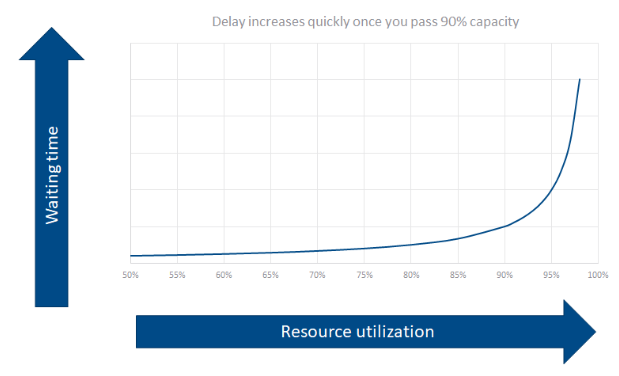 This makes no sense!

At first look, this makes no sense.

I mean, come on! It’s obvious that if your people are working at 80% utilization you can get more work from them simply by increasing the utilization to 90%.

Projects are messy and complex. They frequently compete for the same resources and in this context, we can do a little thought experiment to see why increasing utilization rate will slow you down.

Let’s pretend that you have 10 projects to build advanced teleportation machines. Your projects are chugging along quite nicely, but all 10 need to have their matter-antimatter phaser fields aligned (I am, of course making this up… I mean, come on! Nobody ever has 10 projects chugging along nicely!)

The only person who can align phaser fields is Sally and aligning fields takes a week per project.

The step after phaser field alignment is painting. The paint shop supports the whole company, not just the teleportation team. They are painting Planet Skimmers, Neutron Star Catchers and all sorts of other wonderful devices… and they are running at full capacity.

You’ve scheduled one project per week for Sally for each of the next 10 weeks, starting on Monday, ending on Friday. What’s more, you’ve managed to get a slot in the paint shop on each Monday so Sally can finish on Friday and your teleportation machines can be painted on Monday ready for shipment on Tuesday.

But the third project was tricky. It turns out that this particular task was slightly trickier than the others. Sally couldn’t quite get it done in a week.

So that machine missed it’s paint slot… and there isn’t another paint slot for 2 weeks.

Now, of course, Sally is behind schedule. But, remember, she’s the best darned field aligner in the solar system so you ask her to rush this one to get it done by the end of the week.

Sally’s a helpful soul, so she works night and day to get the fields aligned and she finishes on time. Phew!

But she’s so frazzled by the experience that she makes a mistake on the next project and it takes 2 days to sort things out again. Another paint-slot missed only this time it’s 3 weeks before another slot is free so you escalate… your boss manages to get a slot freed up later this week.

But the project that should have had that slot, a rather sleek star-cruiser, is delayed by 2 weeks as a result… and this really upsets our biggest customer, Galactic Greyhound… who cancels 2 future orders.

Now Sally’s 2 days behind schedule… well, you know where this is going. Projects crash into the back of each other, delays escalate. A small delay on one project leads to total chaos across multiple projects.

And all because we tried to run our resources (actually, just one resource) at full capacity. This is why increasing utilization rates to the point that there’s no “wiggle room” to address challenges actually wrecks everything in real-world project environments.

Still not convinced? Click here and have a few games of Tetris.

Oh, and if your boss sees (or more likely, hears) you playing simply say you are “running a simulation model of capacity-constrained systems under different utilization assumptions.”

Here’s how the simulation works.

You, as I’m sure you are aware, are human. That means you are only able to process information and make a specific number of Tetris moves per minute - this is your capacity.

At the start of the game, I have a lot of time to make each move - I am operating way under capacity (low utilization rate) and I don’t make many errors. 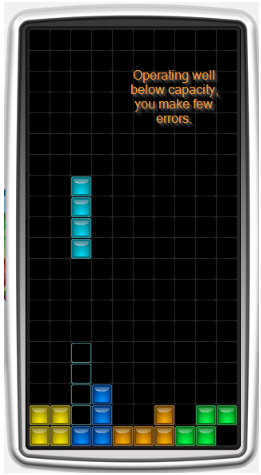 Of course, I still make a few errors (and in Tetris, you don’t easily get to fix them so they accumulate). As the wall gets higher, I have less time to make each move. My capacity to process these moves stays the same, but there are more of them my utilization rate increases.

Still no biggie - I’m still well below the magic 90% utilization and I feel under control. My error rate is still low. 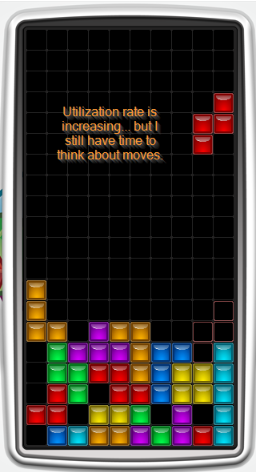 But when the tiles pile up a little higher, the decisions come at you quicker and quicker. My capacity still hasn’t changed but the tiles are coming down so frequently that I’ve gone beyond the magic 90% utilization.

So I make mistakes. And those mistakes mean the wall’s higher and I have even less time to respond… this is just like the situation with Sally where one problem quickly leads to lots of bigger problems. 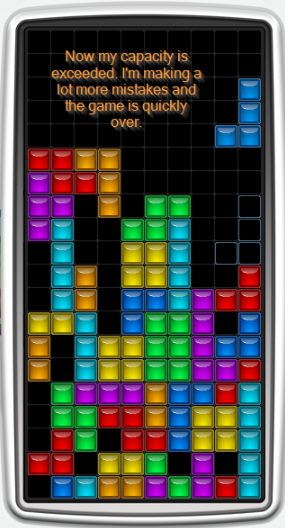 And when you get to this point in Tetris, the game is soon over.

If you’re anything like me, you’ll know the moment that you exceed your capacity. You suddenly become aware that you don’t have enough time, you feel stressed and you see yourself making mistakes. You know you’re doing making errors, but are powerless to do anything else… simply because your utilization rate is too high.

I think that you should do this exercise right now.

Go on, take 5 minutes and play a few games of Tetris. Let the wall build up a little and take note of the point where you suddenly feel the pressure build up - that’s what your team feels every day.

That’s what’s causing a lot of project failures around the world right now, this very second!

What can we do to fix it?

The first thing to do is make sure you really understand the problem. That’s what this blog is about, and if you’ve made it this far, you’ve probably got a good handle on it by now.

The next step is to help your senior stakeholders understand the problem. You boss, the CFO, the CEO - they are the ones who are “throwing projects at you” with a casual, “Just find a way to get it done…”

It’s not their job to dive deeply into the systematic challenges you face when implementing projects. They are not the experts on how to improve project delivery.

I wanted to create something you could use to trigger a commitment to action.

So I created this blog and the video (below). The blog is meant for execs and it would even be great to get them to play Tetris! Let them see the effect of exceeding capacity. Let them feel the panic… and lose the game.

Once you have their attention, you can turn to the solution. And the solution is scarily simple.

You have to prioritize projects and decide which ones don’t get done.

I’ve written extensively on HOW to prioritize projects. Prioritization is a political process, a human process and it turns out that the most common ways of picking projects are not terribly effective. They are so bad, in fact, that an average project portfolio will have 20% of projects “that should be stopped tomorrow” (PMI data).

Imagine the difference it would make if you could identify and stop that 20% of projects!!

Independent academic research shows that prioritizing projects using a method called the Analytic Hierarchy Process (AHP) works well and that’s why we built it into our project prioritization tools.

I’m not going to replicate that whole story here. Rather, I suggest you teleport over and download our Ultimate Guide to Project Prioritization.

And while you wait for Sally to finish aligning your phaser fields, why not play another game of Tetris and think about how to tackle those execs.