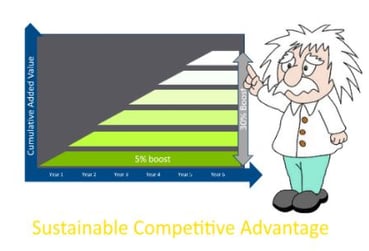 Project prioritization is about strategic alignment and sustainable competitive advantage.

In this blog, I’m going to steal a little technique from Albert Einstein to understand how project prioritization can become sustainable competitive advantage.

I did a physics degree about a million years ago… and one of my favourite classes was when we derived Einstein’s theory of special relativity. It’s over 100 years since he changed the world, but his theory of special (and his later theory of general) relativity is still the best and most accurate theory of space, time, and gravity that we have.

Einstein’s theory of general relativity gets you places… literally. Without it, GPS simply wouldn’t work and your sat-nav would get you lost every time you tried to use it.

And all this greatness started with a series of what Einstein called Gedankenexperiments – usually translated as “thought experiments”.

And I’m going to use a thought experiment to explore the true nature of project prioritization, to see why it’s potentially a massive source of sustainable competitive advantage.

What is sustainable competitive advantage?

Oh no… business school mumbo jumbo this early in the blog? Really?

The idea is that businesses derive “extra value” when they have some “tricks” that give them an advantage in the market. But if that “trick” is easily replicated, competitors can copy it and their advantage goes away, they lose the “extra value”.

I’m not sure that I buy the idea that sustainable competitive advantage is truly sustainable forever and ever. Your advantage is always at risk, but sometimes it can last a long, long time.

Here are some examples of competitive advantage…

In 1907, Einstein was sitting at his desk in the Swiss patent office when he had, what he later called, his happiest thought; “If a person falls freely, he will not feel his own weight.”

This one thought ultimately led to the discovery of the Big Bang, black holes, gravitational lensing, GPS that works, particle accelerators, gravity waves, and other sci-fi-like stuff.

My own “happiest thought” was when I realized that project prioritization represents a real competitive advantage.

Time for that thought experiment.

Imagine 2 parallel universes. They are identical in every way until, one day, an executive at Big Corp in Universe A decided that he was really going to focus on delivering a great project prioritization process for his organization.

The same exec in Universe B did not choose to invest in project prioritization.

Historically, in both of our thought-universes, 20% of projects that are undertaken are waste. They are so badly aligned with Big Corp strategy that they should be stopped. By some miracle, 20% waste is exactly the number the PMI and the Economist Intelligence Unit found in our own universe.

Now, because Big Corp A (Big Corp in Universe A) focused on prioritization as a process, they are able to reduce waste to, say, 15%. For Big Corp B, the number remains at 20%.

This means that, with the same budget and resources, Big Corp A gets 5% more value than Big  Corp  B. 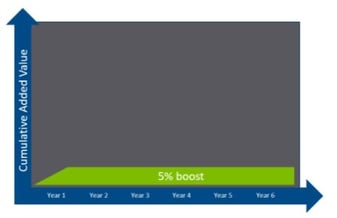 And they get this value year-after-year, not just in the year they deliver the project. Think about it; if you deliver a CRM upgrade that makes your call centre 10% more efficient, you get that extra efficiency this year, next year and the year after….

So, in year 2 of our experiment, Big Corp A, once again, selects a portfolio with 15% waste vs. Big Corp B’s 20%. They get another 5% extra “value” from the same resources which adds to the 5% from the previous year…

Big Corp A is now delivering 10% more value than Big Corp B and they haven’t spent one extra penny to do it.

By year 6 of our thought experiment, the difference in performance between Big Corp A and Big Corp B is:

From the same resources!

That’s one heck of a competitive advantage!

But is it sustainable?

It's interesting to note that our examples of competitive advantage that are more sustainable (Coke and Toyota) rely on “secret processes” and this is not, in my view, an accident.

Product features, new services, new technologies are visible from outside your organization. When another organization sees your new service, they can copy it. They might need to dance around your patents, but generally, the competition will copy you and your advantage is not terribly long-lasting.

An innovative process or system that is not visible from the outside, however, is much harder to replicate. It’s not impossible, but it’s harder.

Project prioritization is like that. It’s a process buried deep within the company. It’s not visible from outside. Your competitors might see you surging ahead, but they can’t tell WHY or HOW… so they can’t copy it.

Of course, over time, word spreads and other organizations will learn to prioritize properly. “Good prioritization” will become industry standard, much as “just-in-time delivery” has within the automotive industry, and failing to adopt this best-practice would be a competitive DIS-advantage.

But that could take decades…

…and in the meantime, you get to enjoy all that lovely competitive advantage.

The best way to prioritize projects

I’ve covered this topic elsewhere, so I’ll keep this short.

There is a lot of research into project prioritization and how to do it well. There have been many processes and methodologies, tools and spreadsheets proposed and tested.

Of the two, DEA is rather difficult to implement, leaving AHP as the champion. AHP stands for the Analytic Hierarchy Process and research has shown that it works… and that’s why we have built it into our project prioritization product. We’ve spent the best part of a decade learning how to make it work, how to make it effective (and that’s our competitive advantage).

What you really need to take away from this section is that there is a “best way” to prioritize projects, one that helps align projects to your strategic goals while identifying waste, and it’s called AHP.

If you’d like to learn more about project prioritization in general, check out our Ultimate Guide to Project Prioritization.

Yeah, yeah… but does it work?

There is some really good evidence that this approach really does provide the advantage that we seek.

One study by McKinsey showed that companies that prioritize at the strategic portfolio level are worth 40% more than those that don’t really invest in prioritization. That’s a HUGE strategic advantage.

Another academic study found that strategic alignment (the output of a good prioritization process is strategically aligned investment in projects) and buy-in accounts for 90% of the performance difference between companies… a staggering result.

So, yes, it would appear that data from our own universe backs up the intuition developed during our thought experiment.

Investing in developing a highly-effective project prioritization process, one that delivers strong strategic alignment, is a pretty good example of competitive advantage.

And AHP is the best way to get there.

Just remember, one day, everyone will be doing it so best to implement it early so you, and not your competitors, get the advantage.

Why not make that your “Happiest Thought” for today?.