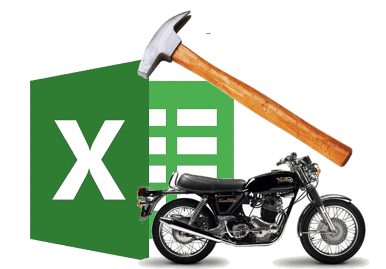 Many PMOs have a tool that they like to use for all kinds of jobs. It’s called Microsoft Excel.

When I was young, I always thought that the hammer was the right tool for any job, but my dad taught me that there’s a "right tool" for each job... and it's seldom a hammer.

You’ve no idea how much damage I did to his vintage motorcycles with that hammer.

And the PMO's fondness for Excel does a lot of damage. Spreadsheets waste resources, end careers and even kill whole companies.

In this webinar, Amanda Oakenfull of IBM, talks about spreadsheets and just how dangerous they are… and she should know. She’s been turning around failed projects and portfolios for decades… and she’s seen the damage that spreadsheets in the wrong place can cause.

So, the call to action from this blog is simple – sign up and watch the video.

But that would be a lame blog, right, so I thought I’d have some fun and share a few spreadsheet jokes, sprinkle in some real PMO spreadsheet abuse, and see if you can tell the difference.

1. I was planning to go to Norway on holiday this year. I ran the numbers through my spreadsheet and it turns out I couldn’t a-fjord it.

That was a joke, of course.

2. Did you hear about the PMO Director who used a spreadsheet to  prioritize projects? He got fired!

This one is, unfortunately, totally true. Spreadsheets are probably the most common tool for prioritizing projects – could explain why 20% of projects are so badly aligned with business goals that “they should be stopped” (PMI data). That’s a pretty high wastage rate and it’s not funny.

I know of at least one PMO leader (in Brazil) who spent 6 months building a “magic spreadsheet” to prioritize projects and the results were so badly aligned with the business that he was fired.

I know of another case where a top-tier consulting company had their contract axed because the spreadsheet they’d built to prioritize projects was so obviously wrong.

Spreadsheets are the wrong tool for prioritization. The research says you should be using something called AHP… but I won’t go into it here. If you want to learn more about project prioritization, I’d recommend our Ultimate Guide to Project Prioritization.

3. Why was the spreadsheet afraid of its chart?

Because it has multiple axes.

Joke, of course, though non-native English-speakers may have to do some Googling to understand the pun.

4. Why did the resource manager want to scream? Because she used Excel.

Not a joke. Not even remotely funny.

Many organizations still use spreadsheets to manage their resources. There’s no connection between projects and resources, no capacity management just lots of frustration and lost hours spent moving stuff around trying to get it to fit.

Now, if you know me, you know I LOVE Donna Fitzgerald. She used to run Gartner’s PPM team and has just seen it all, done it every which way, survived it, run with the big dogs... I mean, Donna is legend!

So if you’d like the help of a legend to transition your resource planning from Excel into something a little more grown-up, try this video.

5. What’s the most dangerous cell in the spreadsheet?   AK47!

It’s a joke, obviously, because the real answer is cell C4… 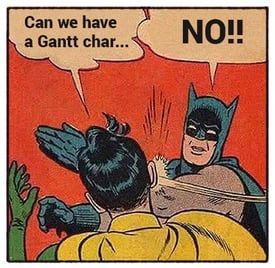 6. What do you guys think of my idea to abstain from working with spreadsheets for 40 days before Easter?

I think it's Excel Lent.

It’s a joke, obviously, because no one can survive 40 days without tinkering with a spreadsheet!

7. My team uses Excel to manage our projects.

But no, many people still use spreadsheets to manage projects. There is really is no excuse for it these days. Years ago, it was a spreadsheet or a proper project management tool that cost money and that had a pretty steep learning curve. I remember the first time I tried to use MS Project… it kind of assumed I knew something about project management (which I didn’t) and it didn’t end well.

But these days, there are tools like Jira to track tasks, or Monday.com and Asana to support team collaboration so even if you’re not into formal project management, you can get out of a spreadsheet and start getting things done. 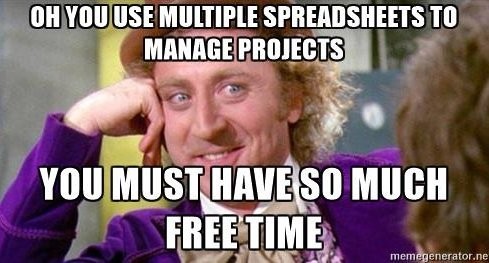 So…. it’s time to put down the hammer and pick up the right tool for the job. I know it’s tempting to just grab Excel and “do something”. It’s free, right? 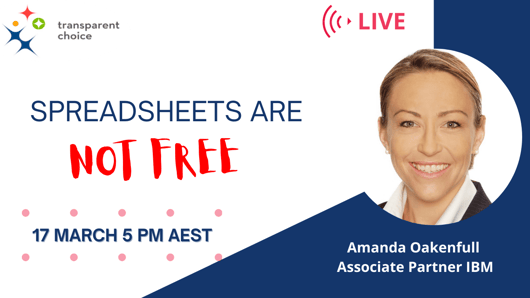