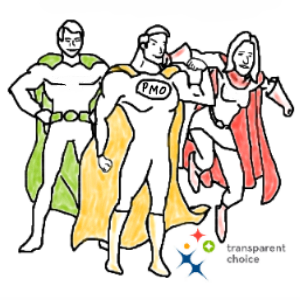 Every PMO has the potential to be a superhero. Seriously.

Anyone who can deliver a sustained competitive advantage is a superhero (in company terms, anyway). It may be the “golden touch” on product (Steve Jobs) or the ability to spot a value-investment opportunity (Warren Buffet).

The superpower that every PMO has is the power to deliver a far more efficient and effective use of capital.

Hmmm – doesn’t sound as cool as X-ray vision or the power to create force-fields… but you know those aren’t real, right?

Apart from my Mum, who definitely had X-ray vision while I was growing up.

A more efficient and effective use of capital, however, is about as important for a company (or government agency, NGO, etc.) as it gets.

So, put your underpants on the outside and prepare to change the world!

Capital. It’s the lifeblood that allows every organization to live.

That’s not just a colourful metaphor. Capital (essentially “cash”) is what enables you to operate, to pay wages, to buy supplies, to fund product development and to deliver projects. It flows into the organization. It flows out again.

And between “in” and “out”, it flows around enabling the organization to “do stuff”.

The quality and quantity of the “stuff” you do defines how successful you are as an organization.

I spoke recently with one of the world’s largest airlines (top 10). They deploy a lot of capital. Last year, they managed to reduce year-on-year fuel bills by over $200m, but that’s not really a sustainable differentiator. If the price of oil falls, it falls for everyone.

This particular airline is a real service innovator, having been the first to launch a whole bunch of in-flight / ground-based services… but that differentiates them for, what?, six months? Then the other airlines catch up.

Their COO, however, views one powerful differentiator to be more efficient use of capital. Now, in this airline, they spend half-a-billion (give-or-take) on aircraft maintenance, a few billion on salaries. The numbers are huge.

If you can make these investments more effective (having more strategic business impact) and more efficient (doing more with less), it can simply have a massive impact.

And how do you improve capital efficiency? Well, you change things up….

And the way you deliver change is through the portfolio of projects of which you are the custodian.

So, making sure you’re doing the right projects, and doing them well, is a real strategic differentiator because;

As I pondered this, I came across a summary of a 2014 “State of PM” report by PWC. It clearly states:

Portfolio Management is a competitive differentiator.

And if PWC says it, it must be true.

THIS is the entire point of the PMO. It’s not about reporting and methodologies, standardization and reporting. They are just tools.

And sometimes we get so wrapped up in the tools that we forget the PMO only exists to ensure the organization is able to make more effective and efficient use of capital in order to achieve strategic goals.

Releasing the PMO Superhero within you!

Amanda Oakenfull of Deloitte, recently told me that she thinks there is quite a bit of “fluff” in the industry and I suspect she’s right. You only have to do two things well to be a PMO Superhero.

I’m clearly not going to go over every aspect of these two tasks in this blog. Instead, here are a few resources from TransparentChoice’s back-catalogue that will point you in the right direction.


There is plenty of support for would-be PMO Superheroes – in fact, I’d say there’s almost too much help. I hope the links on this page will simplify things and help you Save the World ™!

Now, don’t let your cape get caught in the door on your way out.